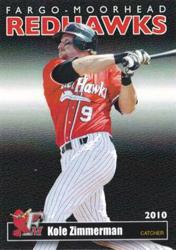 Kole Zimmerman will serve as the Associate Director of Player Development and lead hitting instructor for the HBA.  Zimmerman joins the HBA after spending ten years coaching and instructing following his collegiate and professional career in Fargo, ND.
‘Zimm’ was a four-year starter and three-time captain for the NDSU Bison helping lead the team to a conference title in 2004. He finished his career in the top ten in school history in hits, runs, rbis, extra-base hits, games, and walks.
Following his collegiate career, he signed with the Fargo-Moorhead RedHawks of the Northern League and American Association where he was a part of three division titles and two league championships. He led all rookies in home runs in 2008.
From 2009-2012 he coached with the NDSU varsity team serving as hitting coach, as well as pitching coach. In 2012, Zimm was hired as the hitting coach for the RedHawks over five seasons the RedHawks set single season records for wins, runs, doubles, extra base hits, home runs. In 2018,  he accepted the hitting coach/bench coach position for the Trois-Rivieres Aigles of the CanAm League, setting team records in wins, runs, doubles, extra base hits, walks, home runs, slugging percentage, and on-base percentage over the last two seasons.
Originally from Windom, MN, Zimm was a three-year starter and captain for the NDSU football team.  He graduated in 2006 with a degree in History and Anthropology, finishing his Masters in History in 2009.