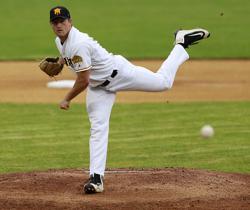 Kris Regas is in his 2nd year with the HBA as Director of Player Development.  As part of these duties, Regas will be responsible for all off-season training and development programs, while working closely with all competitive summer (13U to 18U) programs, including the High School Baseball program.    A product of Jacksonville University, Regas spent over 15 seasons in professional baseball, including independent and international baseball, as well as Short Season affiliate (NY Mets) baseball and a stint at the AAA level with the Detroit Tigers.   A long-time favorite of the Sioux Falls Canaries, Regas appeared in 95 games for the birds, between 2007 and 2009, joining the club, again, for the 2016 season.  Since returning to Sioux Falls, Regas has found a home with the Renner Monarchs as a pitcher and catcher (yes, it’s true) where he helped lead the club to a state title in 2018.  In addition to playing professionally, Regas has found great success as a coach and instructor for areas programs.   He served as an instructor/manager for Squeeze Play Academy (2009-12), as well as with the SF Cyclones, while serving as Director of Player Development for SEBA.  Regas has also coached at the collegiate level with Augustana University and served as a player/pitching coach with the Sussex County Miners in the CanAm League.   Regas earned his B.S. in Mathematics and Computer Science through Jacksonville University and his M.S. in Computer Science from Minnesota State – Mankato.  Outside of baseball, Regas is a part-time math professor and substitute teacher.  He has a 2 year old son (Quinlan) and is a self-proclaimed Fantasy Football expert.